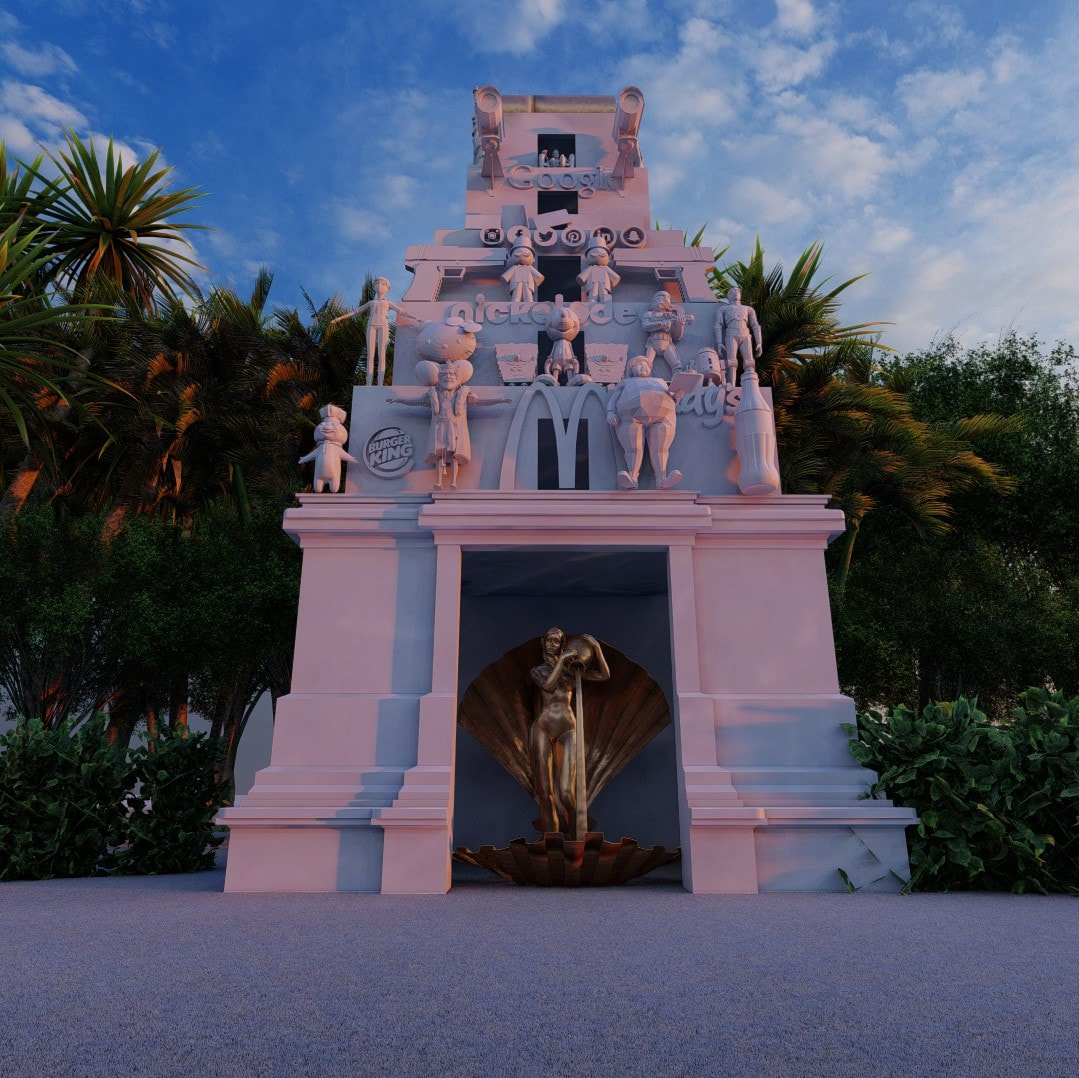 The burden that marginalized groups emerging from colonialism bear is that they are forced to reconcile and always interact against a basis of race. There’s a duality, consequential exclusion and hierarchy: Us against Them, Black against White, North vs South, Rich versus Poor, the Righteous and the Heretics.

​This project is the opportunity to examine the current society, while trying its best to be apolitical, is positioning and depositioning itself against the lenses of spirituality, culture and finance. These hierarchical stances we take, through our language, word choices like “global”, “advancement”, “development”, “civilized”, “tribe”, “urban”, reinforce a racially biased hierarchy without effectively communicating the location, status, ethnicity, region or socioeconomics conditions of the desired group of people. This is not a call for the abolition or policing of anyone’s language, this is simply to highlight the way in which we communicate, what we are indirectly saying. In the avoidance of titles, politics or religious affiliations, we fall under the mass societal faith of the City- State: the Almighty Dollar. We pray and give offerings to false idols of the monopolistic pantheon: Google, the NSA, Social Media Organizations, Fast Food chains, Children's media. The goal is to call attention to the parallels one can draw between Home, State and Church, between Afrocentric and Eurocentric worlds and forms of Globalization- parasite or advancement?

The following exercise was done through Yale's School of Architecture, to allow students to study the mathematical beauty and perfection of honeycombs. The respective renderings and diagrams all demonstrate the beautiful proportions which dictate honey combs as individual cells and a collective bee hive. Many of these same proportions emerge throughout architecture, particularly that of the sacred. The pleasure that the honeycomb and its respective bee evokes is nothing short of the Kantian sublime, a mathematical beauty that calls upon our smallness. 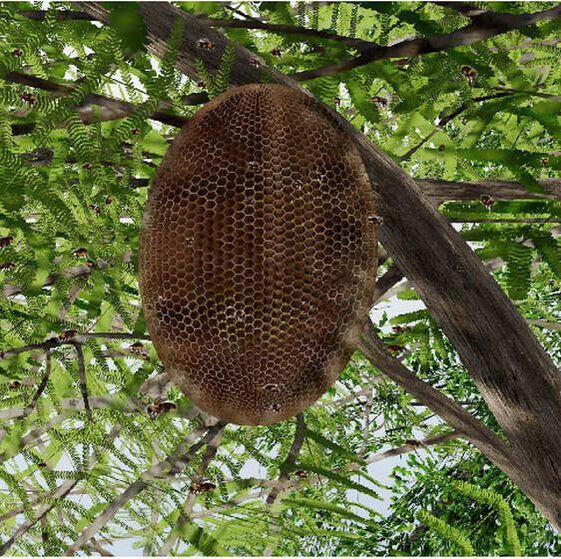 Romanticized Paris: The Imaginary Room in the 18th Quarter

This project is an assignment done through Yale University to express the power of narrative, creating evocative images and an exercise in empathy. The task was to design a space or set of images based on the verbal description another classmate gave us of a place they associate with strong emotions. In this case, the narrative is a young man in his early- twenties, working an internship abroad in the 18th Arrondissement of Paris. Although Paris is thought in the Western collective memory as romantic, beautiful and enlightened, it is not immune from issues of gentrification, nationalism, racism and classicism. All the while, the young man is grappling with individual identity while he tries to navigate a new space, his phenotype- his Asian identity and then his formative experiences- his Canadian identity. The juxtaposition of the historic, imagined Paris, versus the realities of an ignored, impoverished immigrant community and pejorative whispers of some of the French on the street, in some ways better than the silent tension that often festered in the air, hopefully these renderings convey this sense of tension that he feels constantly permeated his home.

He described the space to be tight, congested, "the apartment was only three steps by three steps" on the sixth floor, where stairs was the only option. Sometimes stinky, loud sounds projected from the courtyard six stories below. There as no A/C, an uncomfortable experience. The apartment was relatively square, divided only by a single partition. The floors were a linoleum green tile. The bedroom and kitchen were divided only by a curtain. The bedroom consisted of a twin and dresser. He said when his girlfriend came to visit, she liked it so that indicated that there might be some redeeming touch of beauty. 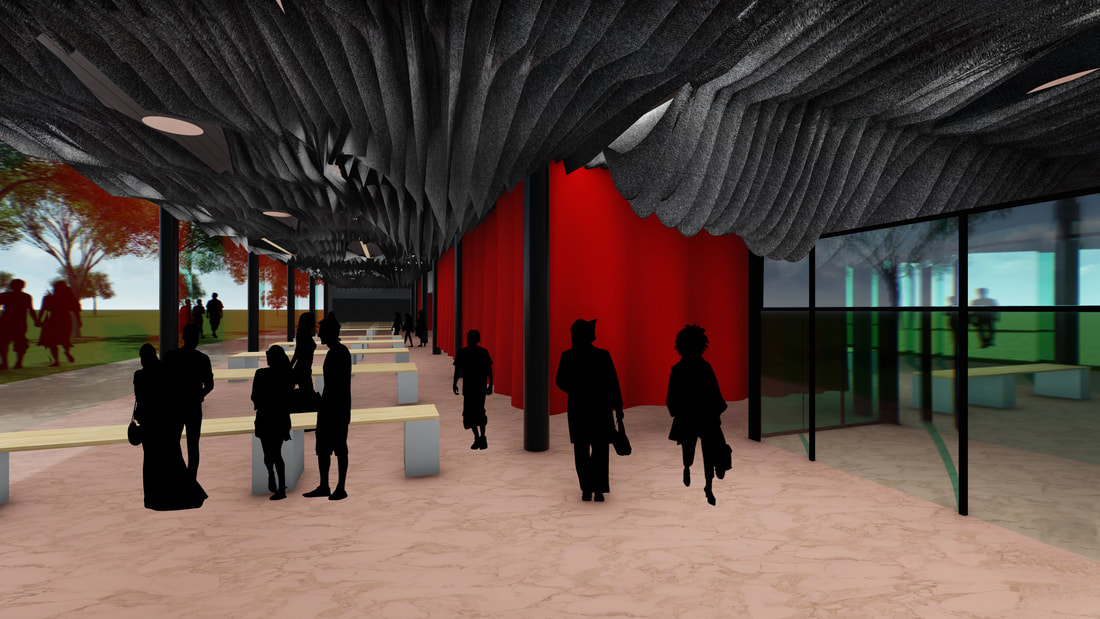 This studio was concentrated on study acoustics with space and design, conceptualizing through model making. The first few weeks were spent studying the basic principles of acoustics and then applying that knowledge to basic geometries we might often see or use in design, by making plastic foam and acoustic foam modular designs. We produced several absorption and diffusion sound panels, which would eventually be applying to our real life studio space, an open plan loud studio. The Murphy Building in the University of Miami is a hermetic studio space, with a large program, including guest jurors in pin- ups,  students in desk crits,

This studio exposed us to a significant amount on fabrication methods: running acoustic simulations through Rhino/ Grasshopper plug- ins such as Pachyderm, modeling software including Powermill, the CNC mill, wire cutting by hand, and milling and wire- cutting with a KUKA robot. Additionally, the consideration of materials, space and design as interdependent entities, 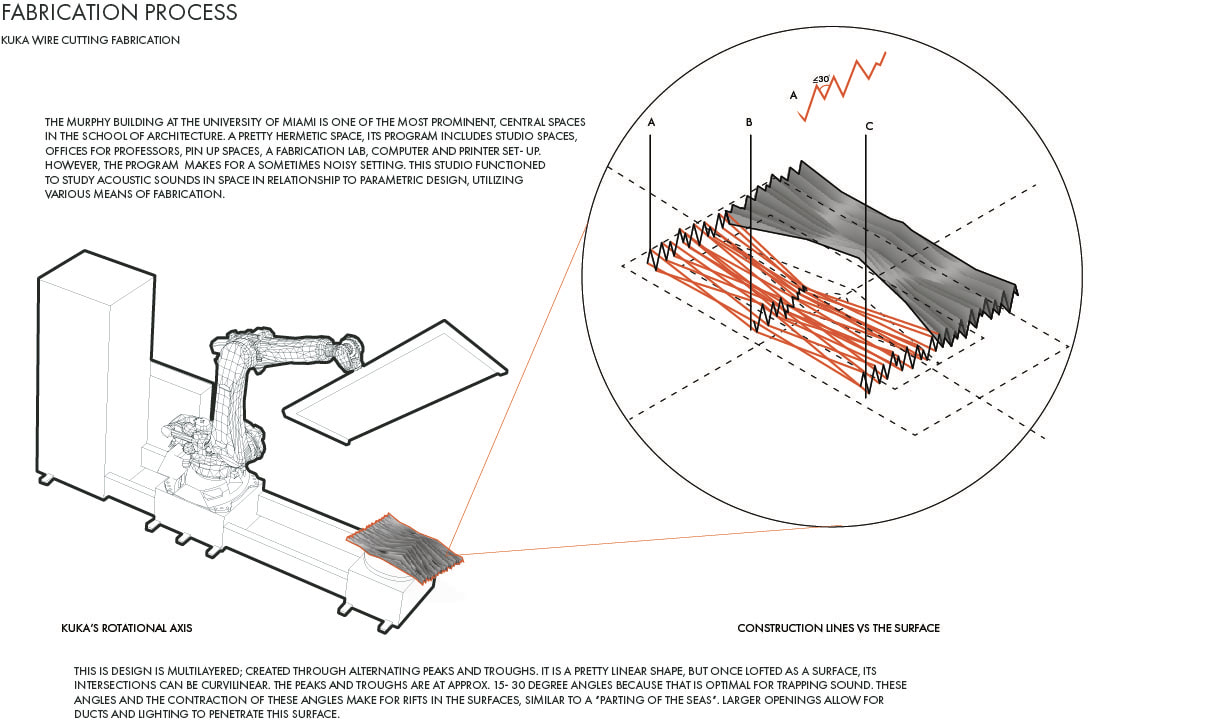 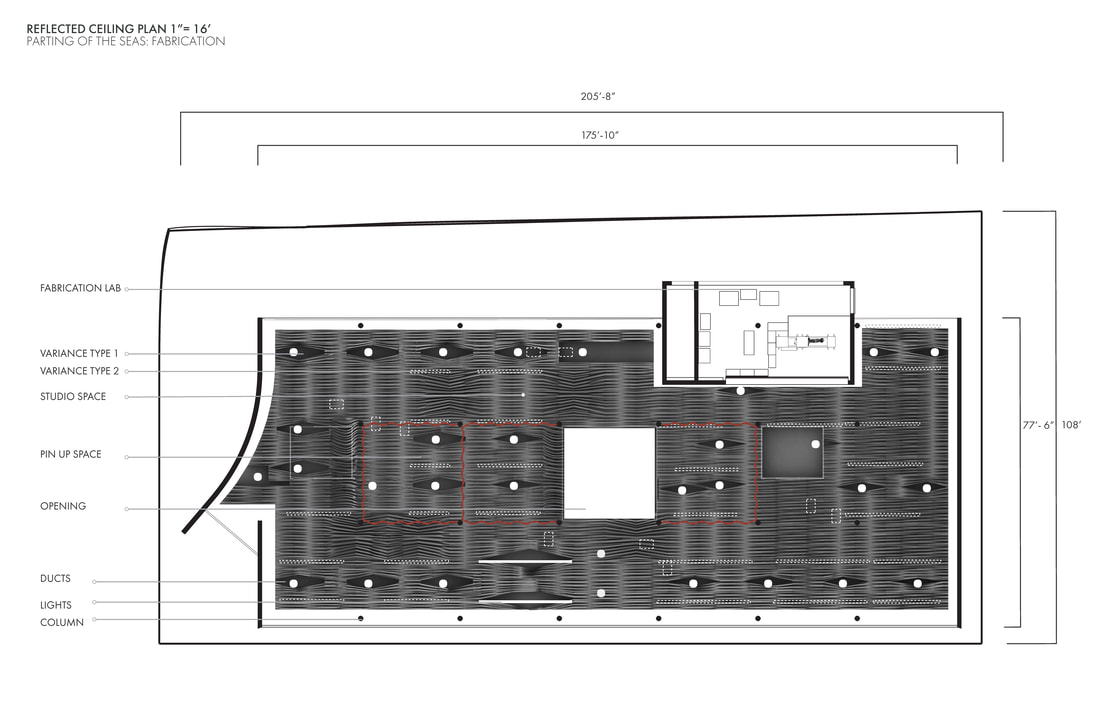 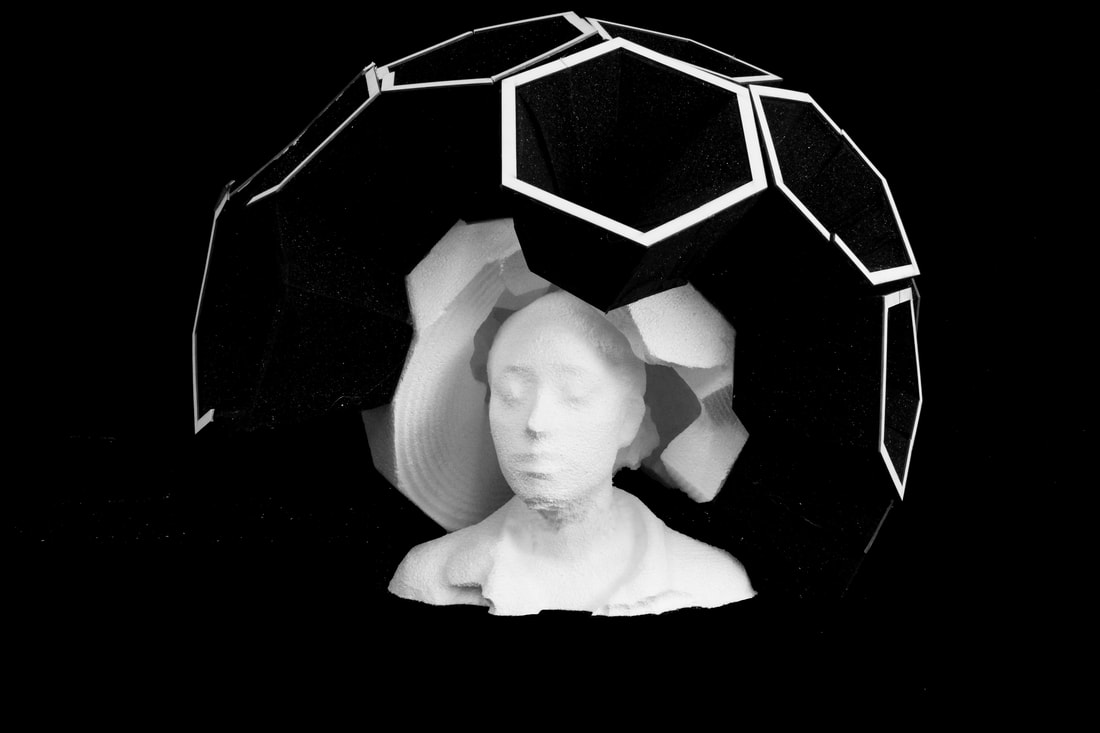 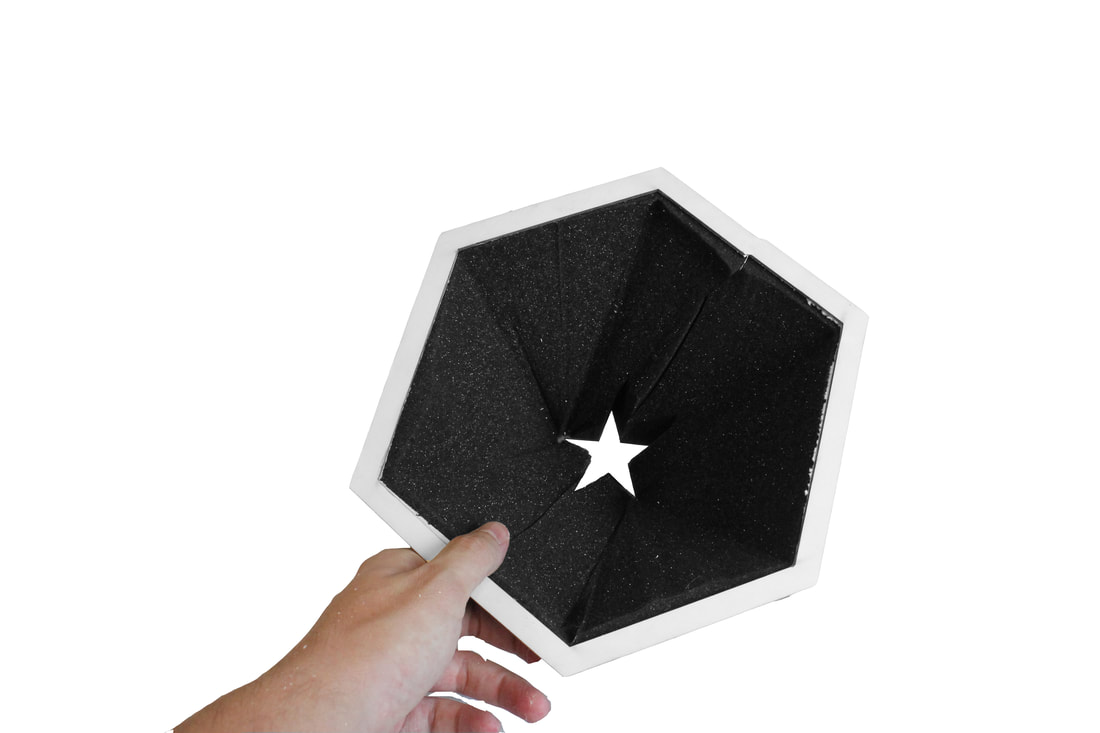 This helmet is meant to be worn by sound sensitive users, specifically autistic children. This studio was dedicated to studying parametric and acoustic design. The studio cultivated different methods of design, sketching different geometries and ultimately fabricating an unusual and fun helmet. The helmet's interior and exterior surfaces function to do the work of sound containment and expulsion. Like many children who enjoy playing dress up, this is a tool for escapism, protection from sound and a container for child- like innocence, fun and curiosity. 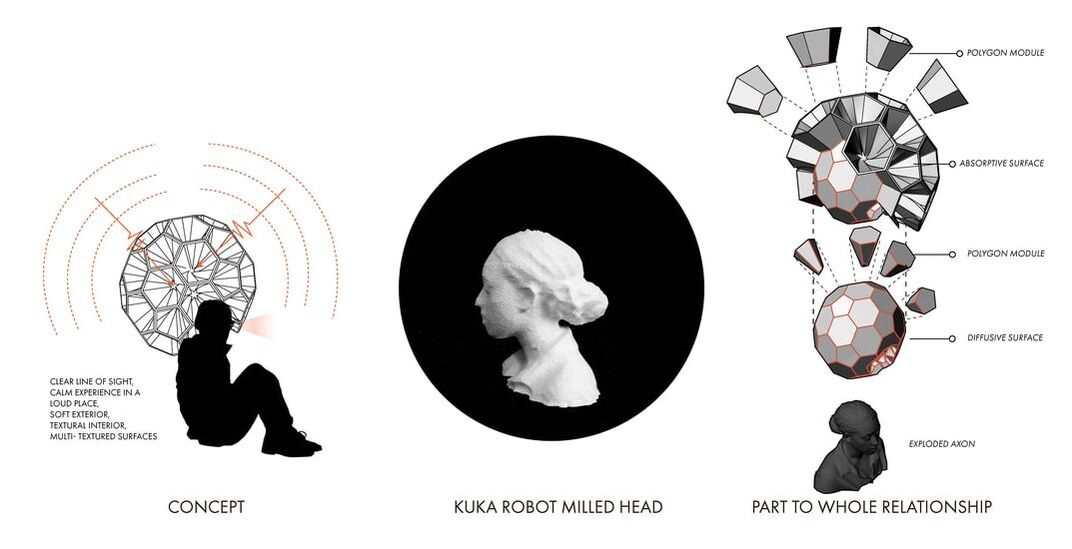 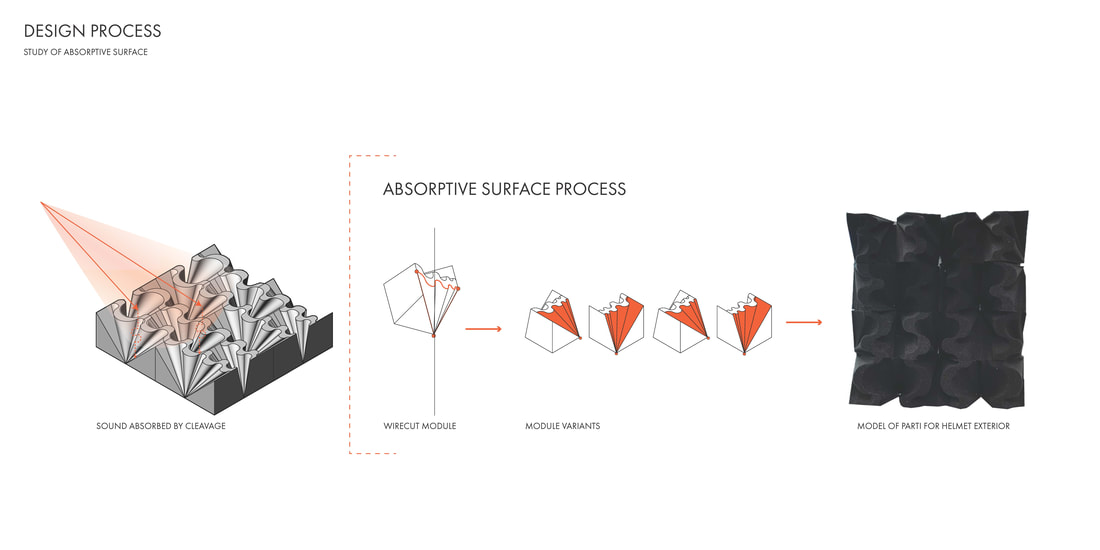 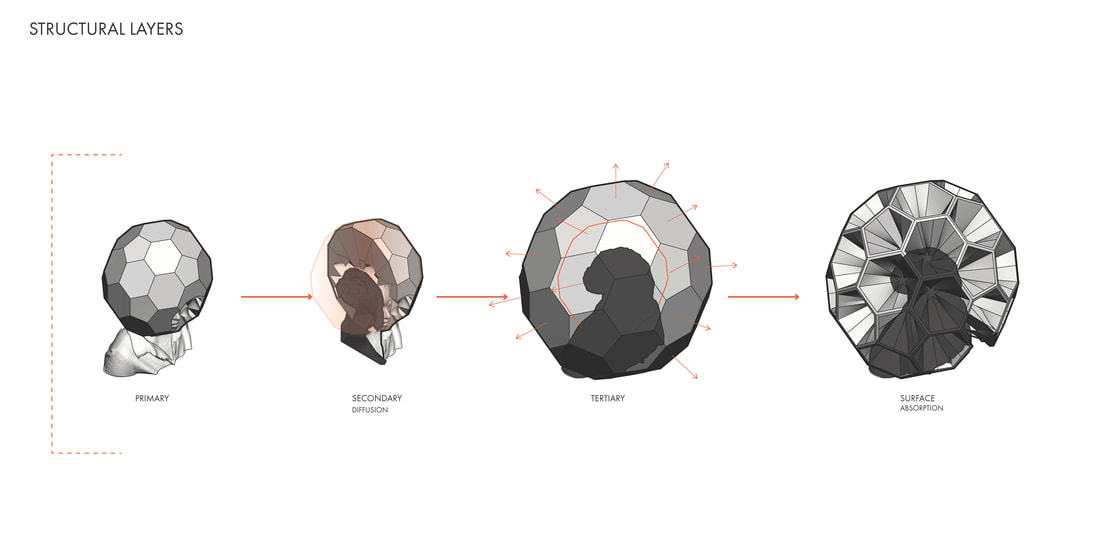 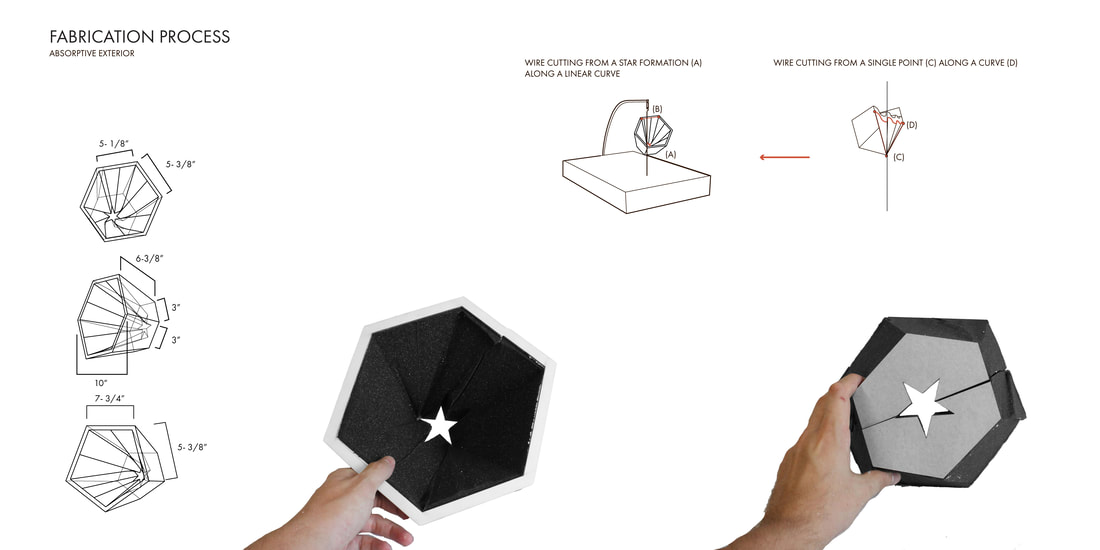 This is a small dining Hall project for Wheaton's College Campus in Norton, Massachusetts. It's a proposed addition to their existing President's Hall for what's supposed to be a humble, domestic scale Georgian house. 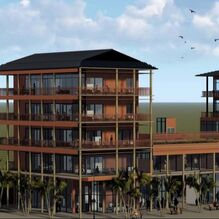 ​The renderings shown above are from a third year comprehensive studio, which is meant to function as high end housing/office spaces for the people of Coconut Grove, bridged by commercial shops. Download the PDF attached to read the full project.
Click below to download the architectural drawings for this project.

This project was located in Coconut Grove in Miami, FL, and marketed for a Bahamian neighborhood. It was inspired by the little houses that reside on the mountainside in Haiti, hence the namesake. The objective of this project was to design work that is detachable and easily transportable. The kiosk is also flexible enough in design to be a vendor for any variety of products. In the rendering shown immediately above, second column, second row shows it as a bakery.

In the exploded axon, the kiosk functions as a kit of parts, with mostly ball bearing hinge or notch connections. The roof is a tin roof with operable overhangs to control shading or function as a marquee. The kiosk is made up of mostly plywood, mahogany with laminated timber joists. The kiosk is raised six inches to accommodate plumbing and electrical. the sink is a transportable commercial sink, where the clean and dirty water is stored under the sink. The electrical is run through the columns, which are hollowed out.

The images and videos shown above are samples of renderings done for a commission to represent a project designed by local, Miami based architect Germane Barnes.

Wolfson Residential Towers is a student housing project for the students of Miami- Dade College Wolfson Campus. The site is located on 200 NE 2nd Street, Downtown Miami, FL. The site is directly adjacent to two major factors: the metro rail and the Wolfson campus. The fronts of the site were left to our discretion, keeping in mind that the Metrorail would serve as the back.

The schematic of the plan is two towers, resting on a slab. This was done after several weeks of studying either slab or tower typologies, including Lucio Costa's Parque Guinle in Brazil and Casa Rustici di Milano by Terragni. The towers were born out of the idea of students having some separation based on interests and the circular slab was based on the shape of the running track. The program, in ascending order, is commercial on the ground, social on the slab, student housing in the towers, and faculty on the top.

The ground floor is double height, composed of restaurants, mailing rooms, convenience stores, bike storage room, lobby and lounging area. Above that is an ovular massing, that functions as a social program. It has two primary functions: exercise and study. The social program is three floors tall. The first floor has three basketball courts at the core and is flanked by a bowling alley on one edge and a stage on the other. The second floor is a mezzanine, dining area, overlooking the courts. The third floor is a wellness center and study lounge, with additional amenities such as laundry, personal fitness rooms. Ascending from that, there are student dorms, topped with faculty housing.

This was done in collaboration with Rachael Liberman.

“Asilo Nido” building is a proposed 2-storey Montessori school, located in a residential block in Venice. Adjacent to it is a three story biblioteca that shares a courtyard with a retirement home, or Casa di Riposo. The main challenge to start designing  was dealing with sea level rise, being sensitive to the scale of the user, existing context and speaking in a vernacular respectful of the existing historic style.

However, in the process of project design, a balance was made between the environment’s demands, ideas of mass versus pixel led to this concept where material communicates function.

The project tried to bridge the older community with the new through the use of materiality and principles of beauty, symmetry and asymmetry in a modern context.​

The Brickell Stage is a group installation done by the faculty and students at the University of Miami School of Architecture. The installation was erected during Art Basel and is the winner of the Public Space Challenge, The Miami Foundation's ideas contest that invests in creating and activating parks and public spaces, along with the Miami- Dade County Transportation & Public Works and Friends of the Underline. This piece was also featured in Dezeen: https://www.dezeen.com/2018/01/18/university-miami-architecture-students-install-bright-orange-brickell-stage-below-metrorail-transit-station/

The stage was designed for interactive performances as shown in the image above.

​Sydney Maubert produced models of the Alfred I. DuPont Building and Arquitectonica's Atlantis shown above.