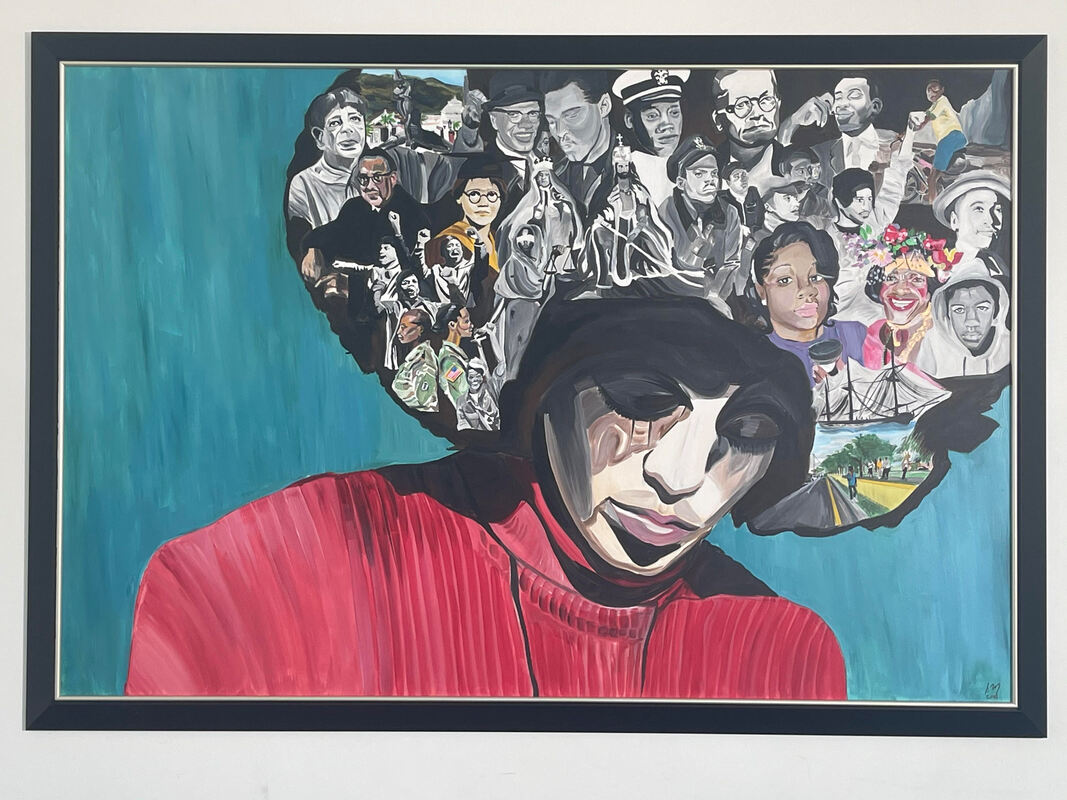 The above painting was commissioned for the University of Miami's School of Law, for the rededication of the Jaret Davis Workspace. The overall encompassing image of the woman with her hair is Angela Davis.

Bottom left hand corner of her afro: a veteran marine of the Vietnam war, two women back to back representing the hair regulations in the military of black women's hair.

To the right side of her hair: the Zong ship from the notorious Zong ship Massacre Trial and finally the race wall in Liberty City. 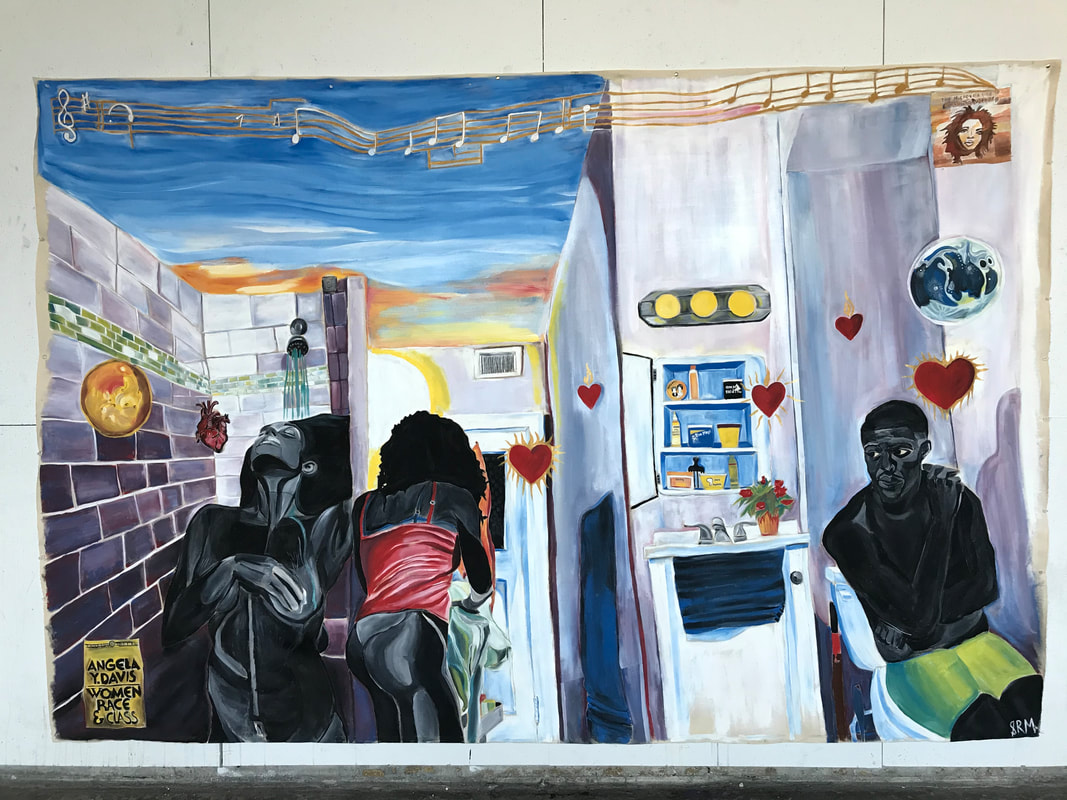 The above mural is depicting Sydney's ritual use of the bathroom, and the strangulation of the ritual through standardization. The exercise of mural painting the experiences personal to Sydney forced her to explore the space more critically as a user, de-positioning myself as the idealistic designer, and rather the honest person engaging with herself, identity and vulnerabilities. 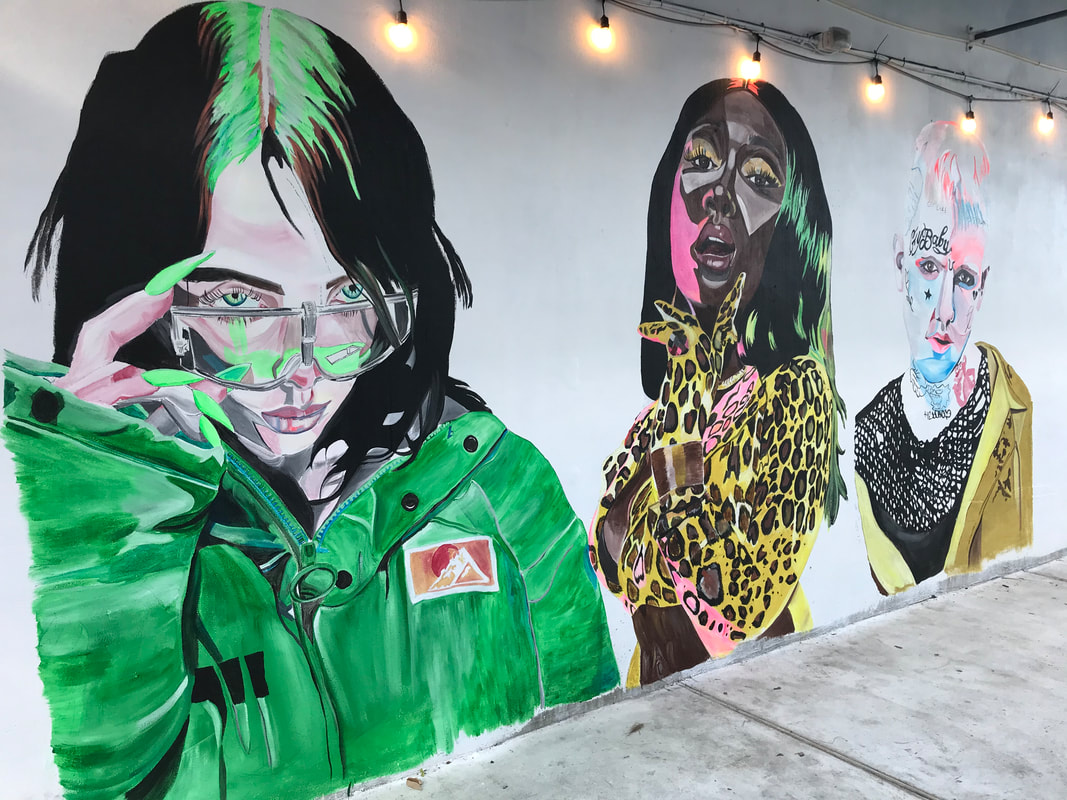 Shown above is Sydney's second mural, completed alone at a Kava bar in Wynwood, Miami's art district. The mural shows portraits of the music artists Billie Eilish, Megan Thee Stallion and Lil Peep, and  is meant to be a celebration of diversity of sound in modern music, and the synthesis of Pop, Rock and Hip Hop. 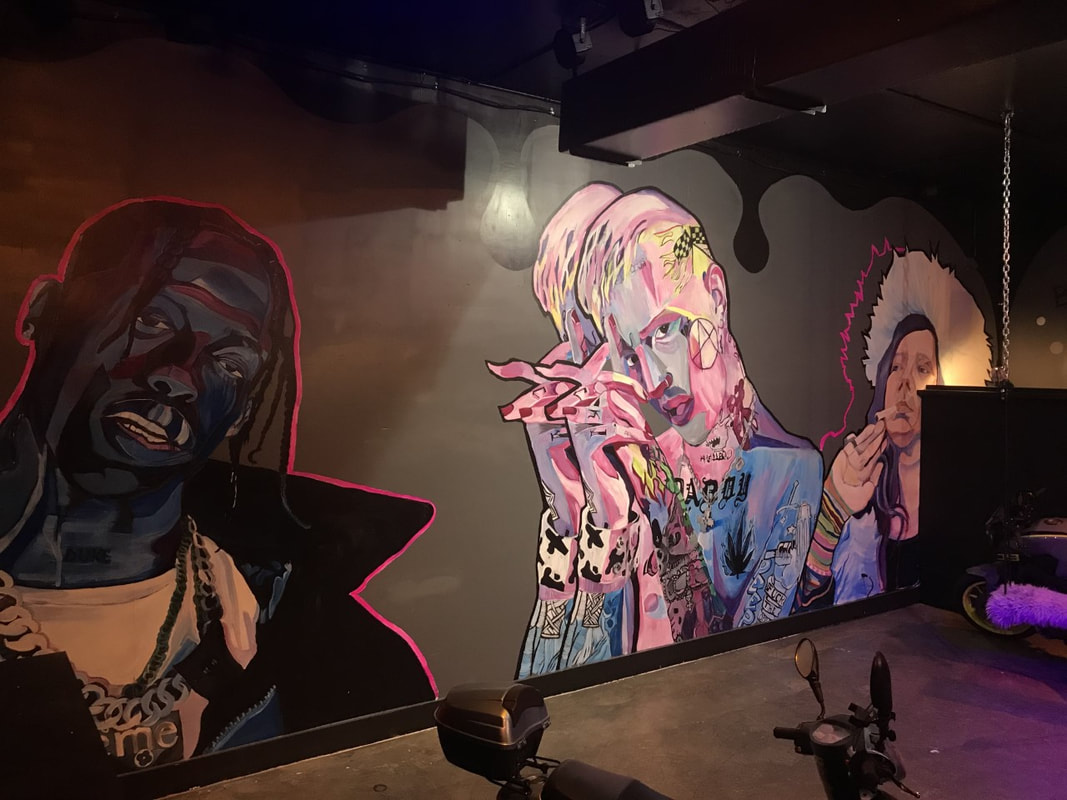 Shown above is Sydney's first mural, completed alone at a Kava bar in Wynwood, Miami's art district. The mural shows portraits of the music artists Travis Scott, Lil Peep and Janis Joplin, and  is meant to show the the progression of music from past, present to future and the synthesis of Rock and Hip Hop.

This was a commission done for Covenant Missionary Baptist Church, Florida City. They are hosting a community fridge in which bystanders can donate untouched fridge for the community who might be hungry or financially crippled.

The above image was practice done during quarantine, based on an image taken with a cell phone.

The above image was commissioned by a student seeking portraits of her father, and deceased paternal grandparents looking over his shoulders.

The above commission was completed in the hopes of capturing the client's grandmother, Virginia Martinez, given there were very few images of her. 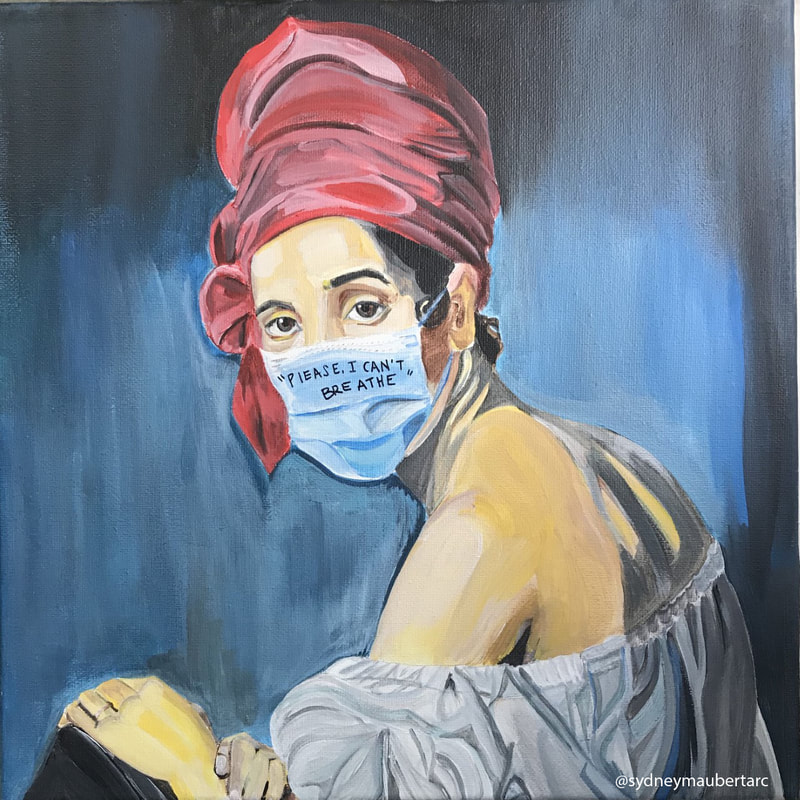 The above image was produced for Professor Mark Gage's class at Yale University School of Architecture, exploring object making and in this case, objects of protest. Black fashion trends often become politicized and in the late 1800s, Tignon law to today with the rise of Corona and racial protests. Black hair became the object of controversy in the 1800s and legacy lives on today. In the late 1800s Louisiana, Black and creole women were asked to cover their hair, and the hair coverings were become embellishments, adorned with feathers, jewelry, high glamourized forms. The suppression of black bodies have always become some form of violence, whether it be psychological, socioeconomic or physical violence through systemic oppression. This piece hopes to depoliticize fashion and black bodies. 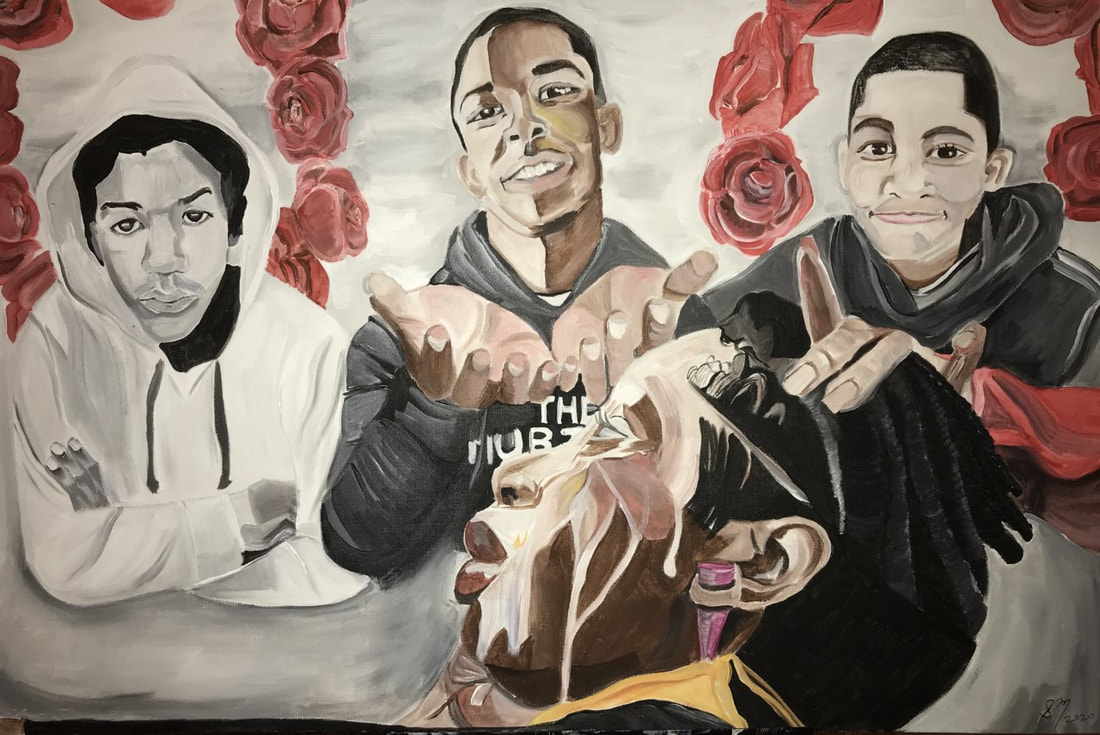 This was a response to an assignment in Yale's School of Architecture, we were asked in an introductory exercise to make a piece that would evoke human compassion in regards to the racial tensions in America. Trayvon Martin, 17 year old African American boy from Miami Gardens walking around his father's neighborhood. Stephon Clark, 22 year old man executed in his grandmother's backyard for holding a phone, "mistaken for a weapon". Tamir Rice, 12 year old boy playing cops and robbers in the snow with another child, and was gunned down by police. The woman in front was a protester in DC tear gassed and consequently had milk poured over her. The depiction of the three boys as saints in hoodies is a social commentary on the demoralization of black men, politicized casual fashion, the decriminalization of black men and the solidarity black men and women have with one another.

"Say Our Names". This is a 5x4' painting, acrylic. Sydney read each of their stories and painted a face. This was a personal project. 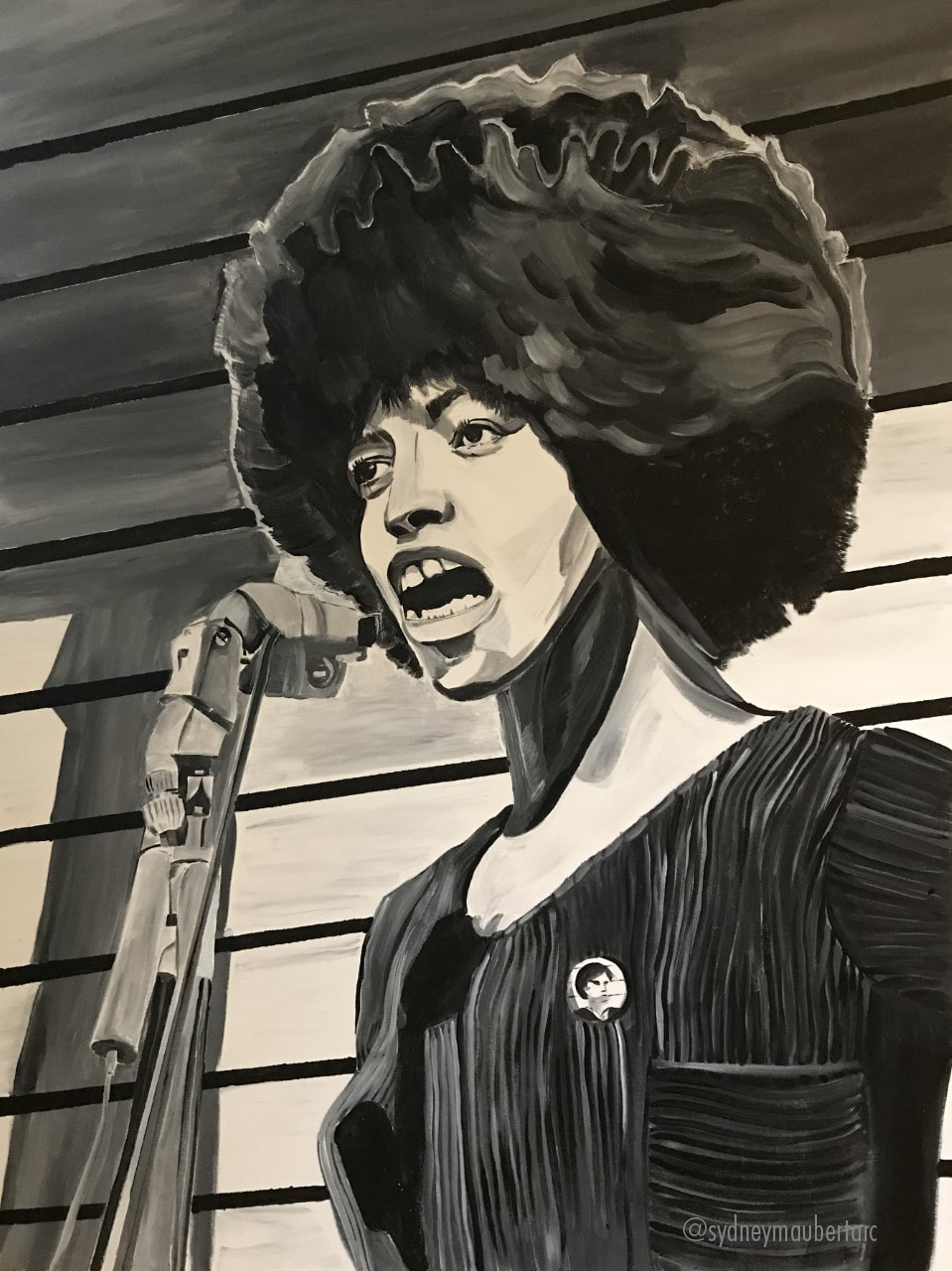 The above is a commissioned piece was inspired by the recent attention given to prison reform, and Angela Davis' incredible legacy.

Angela Davis doesn’t want you to reduce her legacy to the woman with the Afro. Though the Afro became a symbol of “politicized fashion” and “70s nostalgia”, she hopes the younger generation remembers her as an icon of politicized liberation. The legacy of Angela Davis rests in her efforts to free herself and the Soledad Brothers from prison, member of the Black Panthers, and a voice for targeted people under an oppressive socioeconomic system. She spent two months on the run on the FBI’s most wanted list, and spent a little over a year in solitary confinement (let that sink in). While in jail she discovered the disproportionate, destructive repression of black people, chicanos, and working class white people and the absence of attention to women and mothers in prison. Her lifelong dedication and criticism of the prison system as it stands today, and her remarkable ability to connect multiracial committees, religious institutions, schools, factories to free political prisoners as historical agents should be remembered long before her striking beauty.

Shali Tilson was a 22 year old Haitian American man from Georgia, with a business called "Urban Perspective" and had a passion for highlighting the youth in his community. He also happened to have schizophrenia and bipolar disorder, which makes his achievements and compassion for others all the more remarkable. During a mental health crisis was taken under police custody and was a victim of the prison system, was seriously neglected and abused and died a completely avoidable death. His legacy and passion for others should overshadow what was only three days of his life. This image is to bring awareness to his case and the current, unacceptable conditions of the prison system.

The above images are personal studies of Shali Tilson and Oluwatoyin Salau, both victims of the disproportionate violence and oppression of the black community. The purpose of the "Say Our Names" series is to depict positive images of the black community and highlight attention towards the difficult but necessary conversations needed to have about equitable spaces and humanity. This is an emotional exercise done to highlight police brutality, the prison system and systemic racism.

The above image is a portrait of the rapper Young Thug, and this was done in response to music's narrative quality and music as a critique of the built environment. Often Hip Hop is criticized and rejected rather than capitalizing on the wealth of history, culture and current assessment of the political, socioeconomic and social climate of the people singing and rapping. As designers, we should be concerned with the narratives of all users as a means of adjusting the narrative, rather than asking them to change. 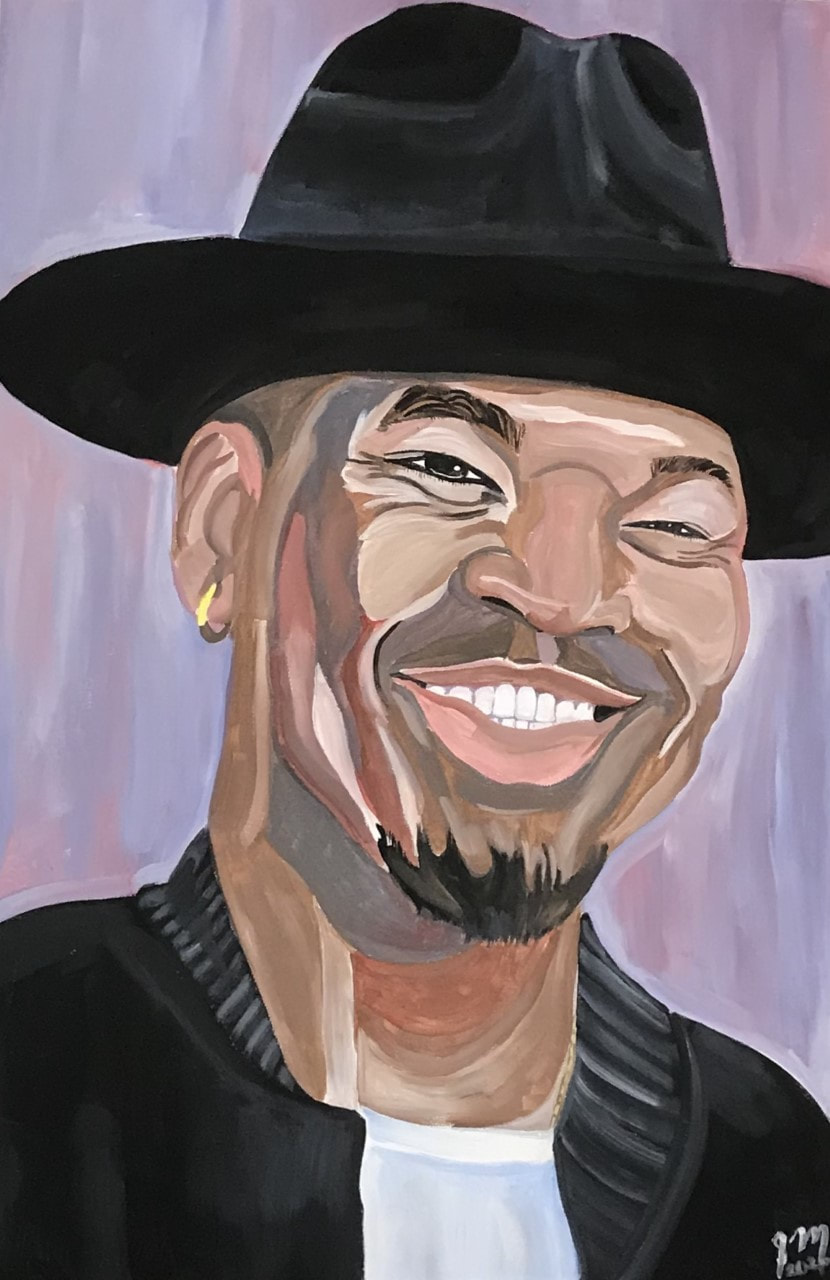 The above commission was a portrait of Neyo, the RnB singer, requested by a fan. 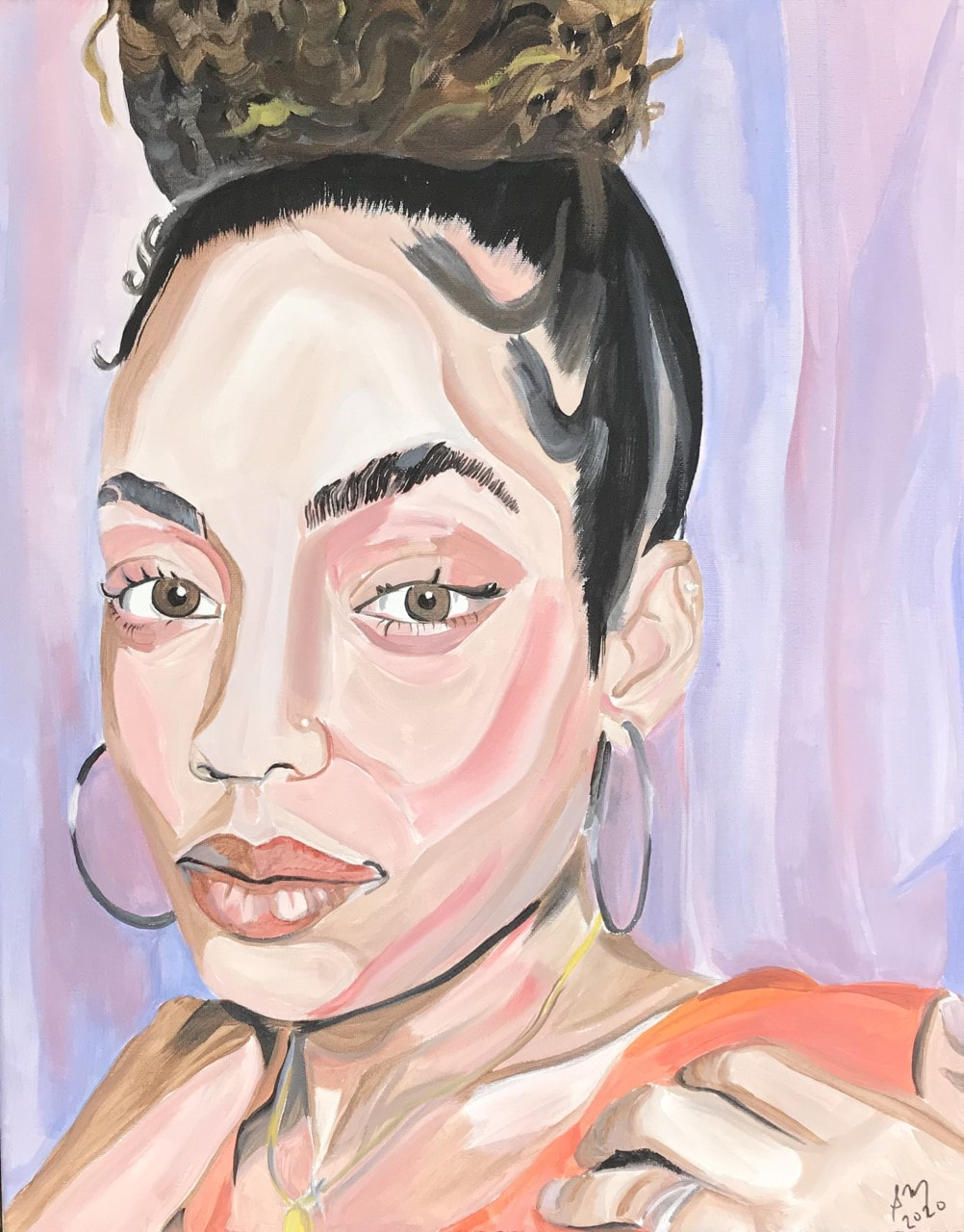 The above commission is a portrait of a friend. 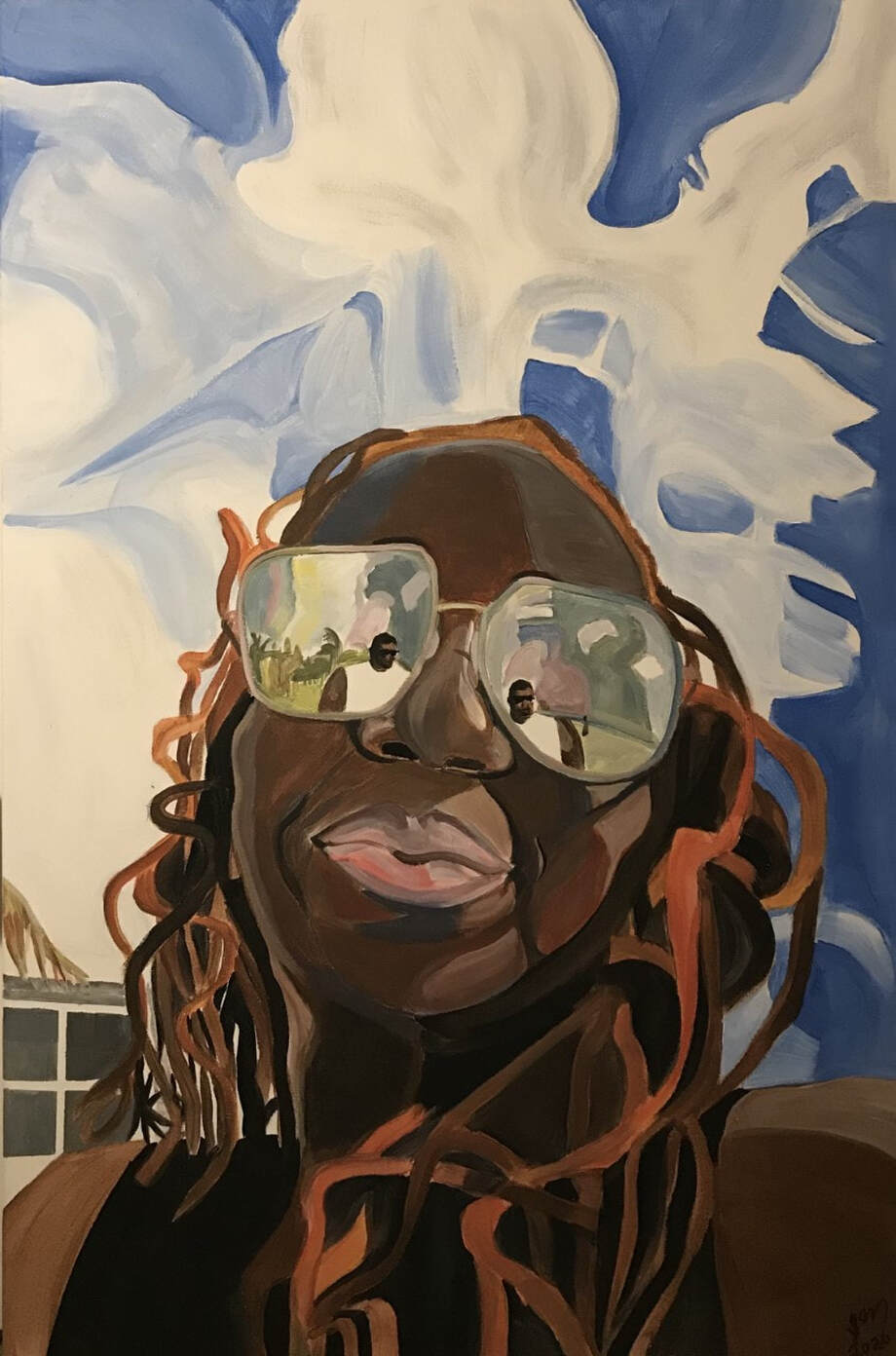 The above image is a painting commissioned by a husband, for his wife.

The above image is a painting commissioned by a mother, of her child.

This was a commission done for a lovely family looking to capture the essence of their son and father dynamic. 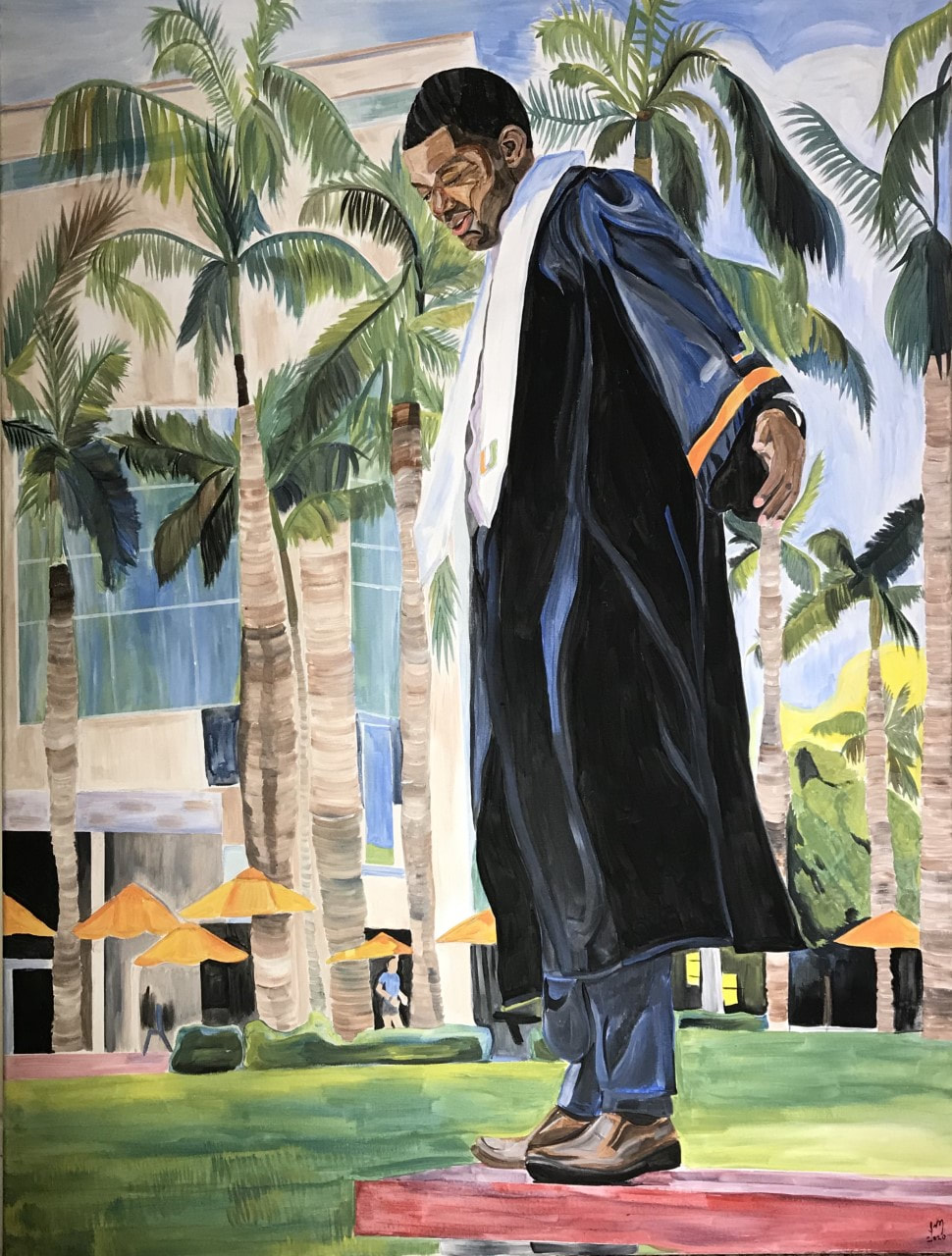 This was a commission done for a friend looking for a self portrait, capturing his graduation day. 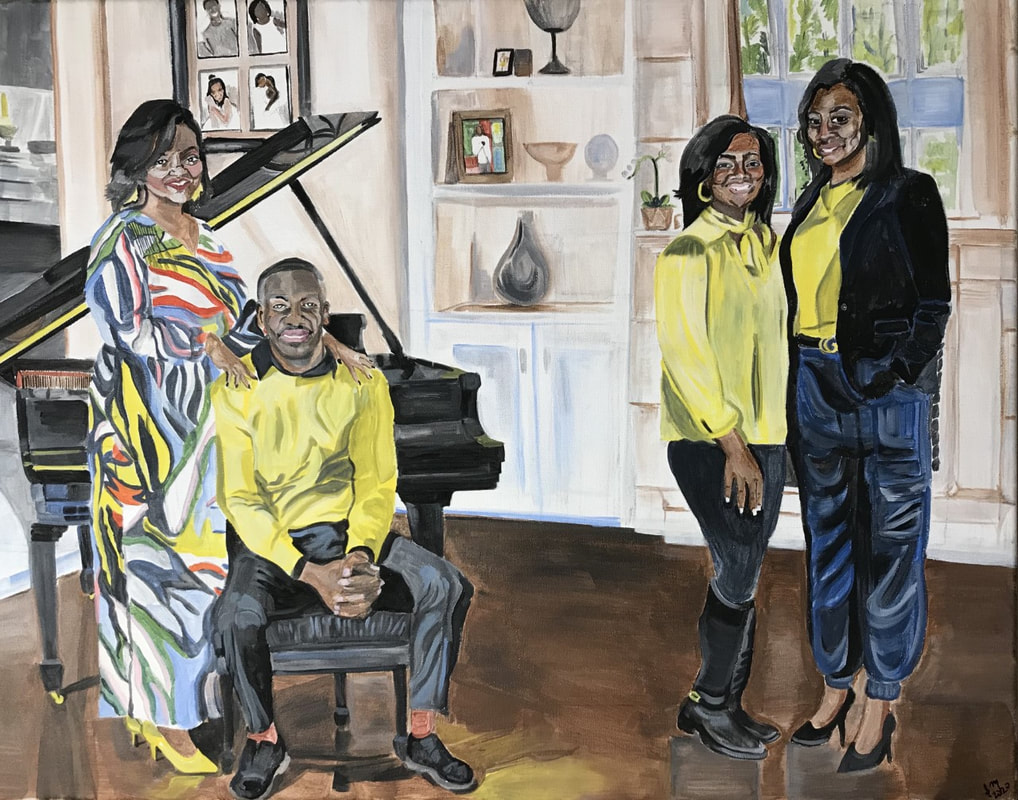 This was a commission done for a lovely family looking to capture the essence of their family dynamic. 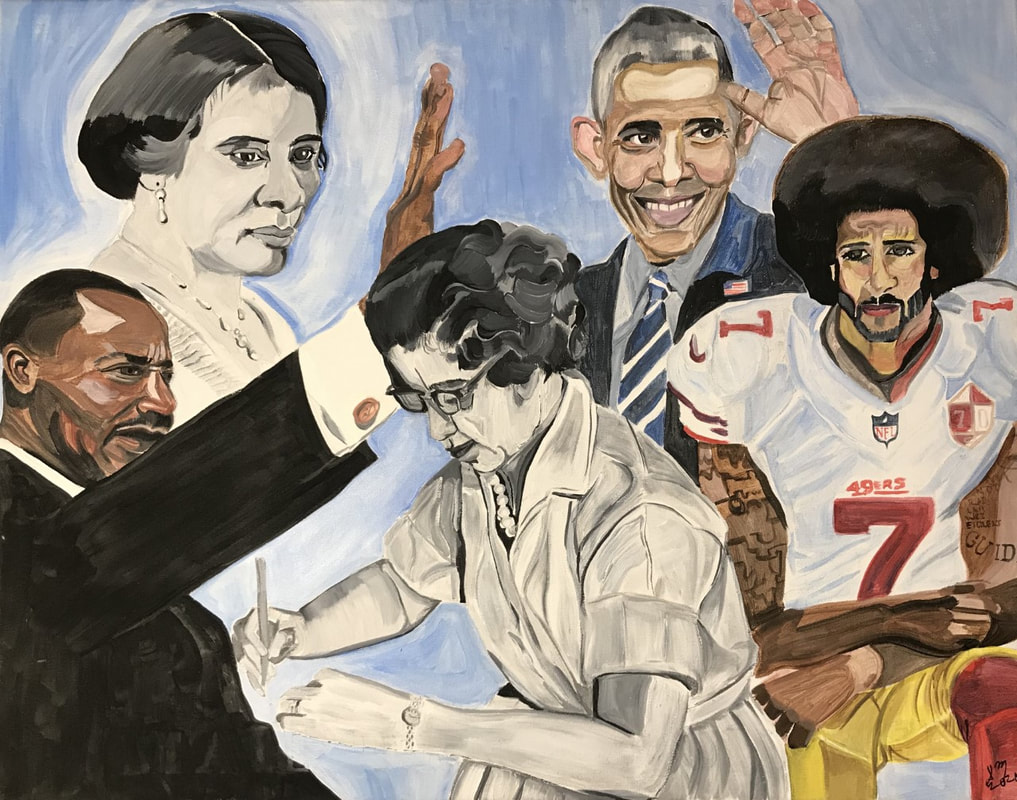 This was a commission done for a friend looking to commemorate the black leaders he admired in history. The images from left to right include Martin Luther King, Madame C. J. Walker, Katherine Johnson, President Obama and Colin Kaepernick. 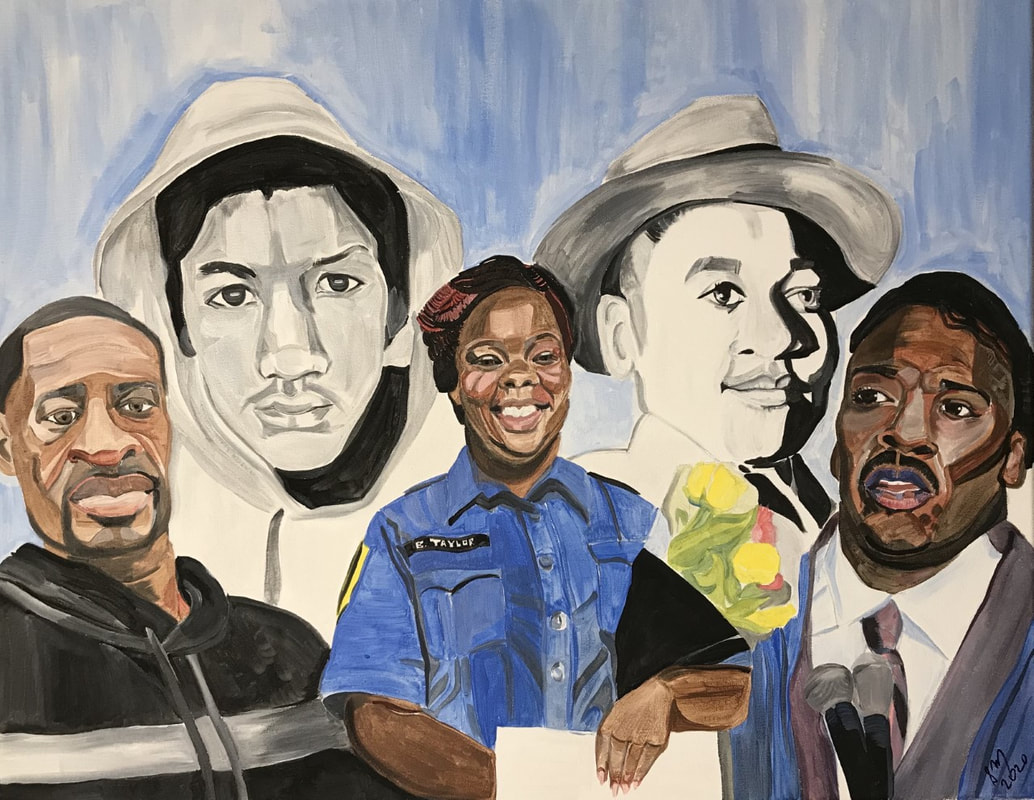 This was a commission done for a friend looking to memorialize those fallen victim to police brutality. The images from left to right include George Floyd, Trayvon Martin, Breonna Taylor, Emmett Till and Rodney King. 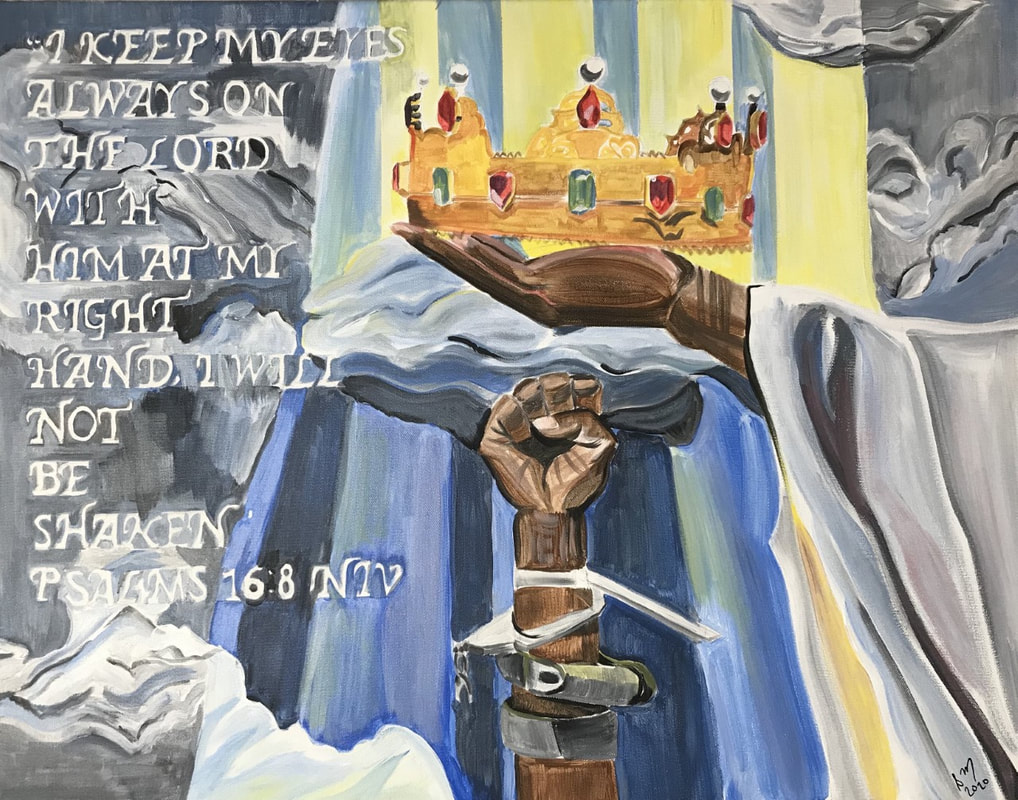 This was a commission done for a friend who wanted to represent his favorite biblical verse Psalm 16:8 NIV. 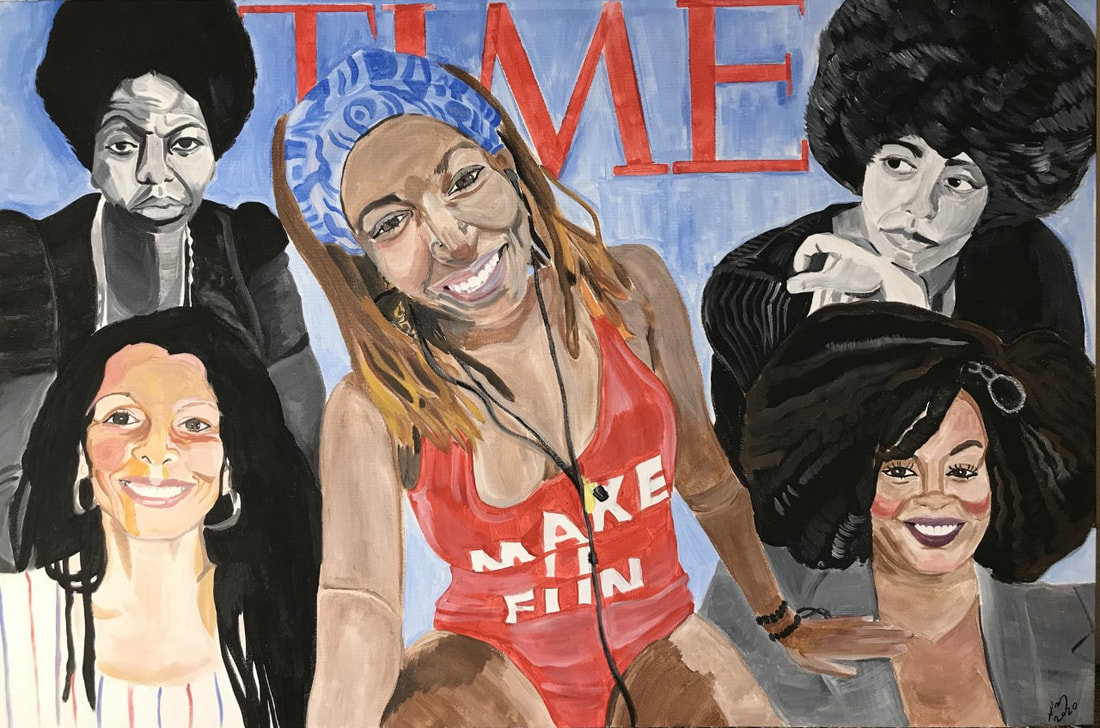 This was a commission for a friend who wanted to celebrate a woman he felt was great, by representing her with other examples of black female excellence. 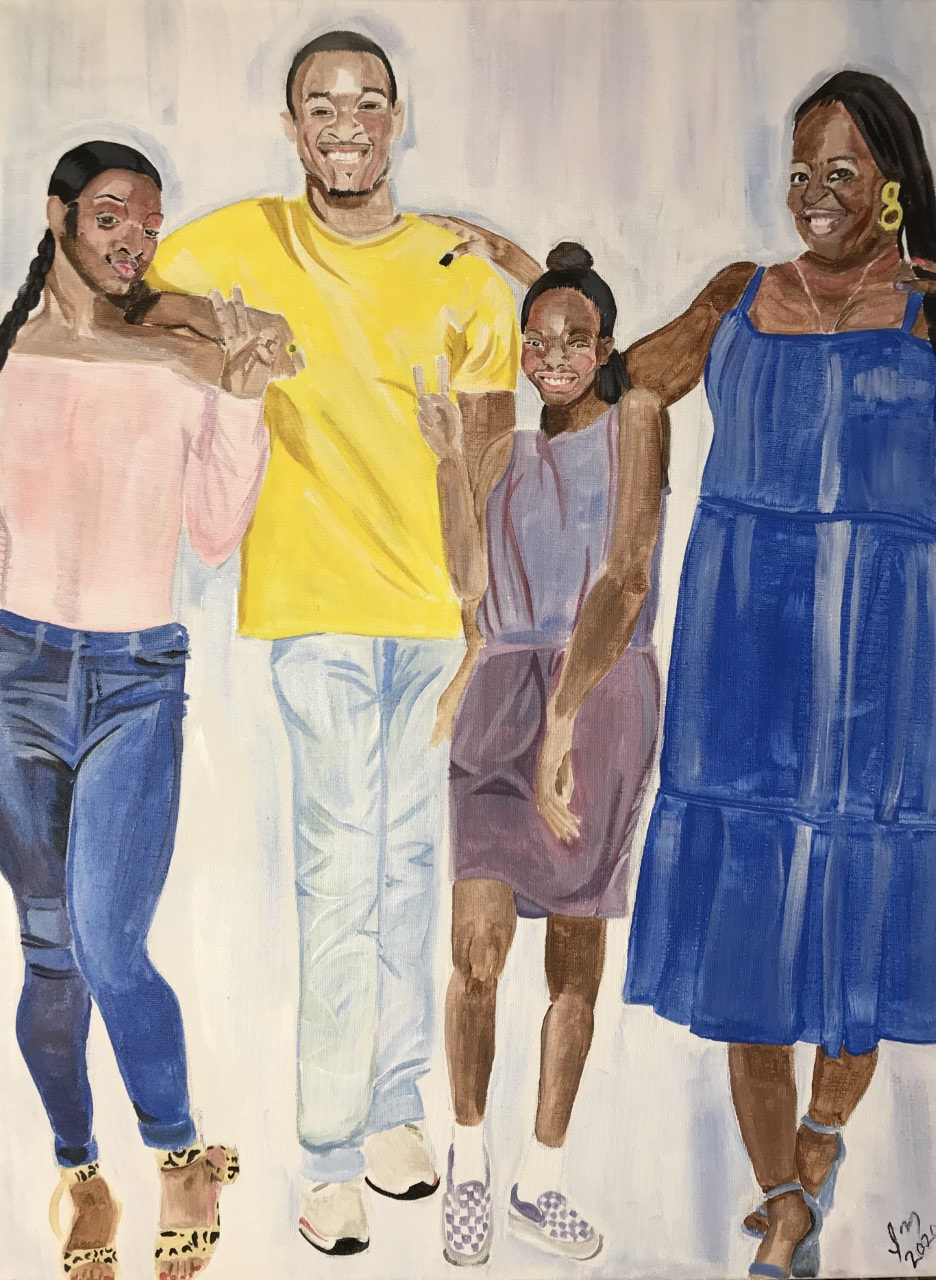 The above is a portrait commissioned by a good friend of his family. 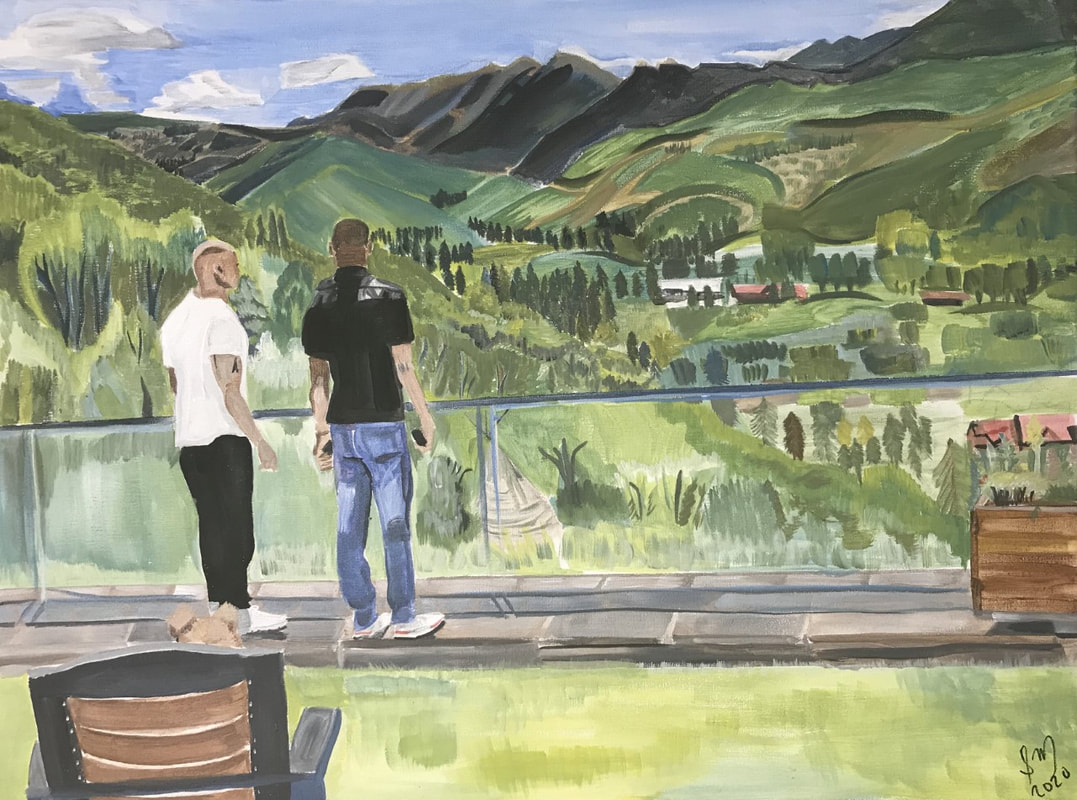 The above is a landscape painting, of a father and son, and discreet young daughter overlooking a backyard commissioned by a good friend. 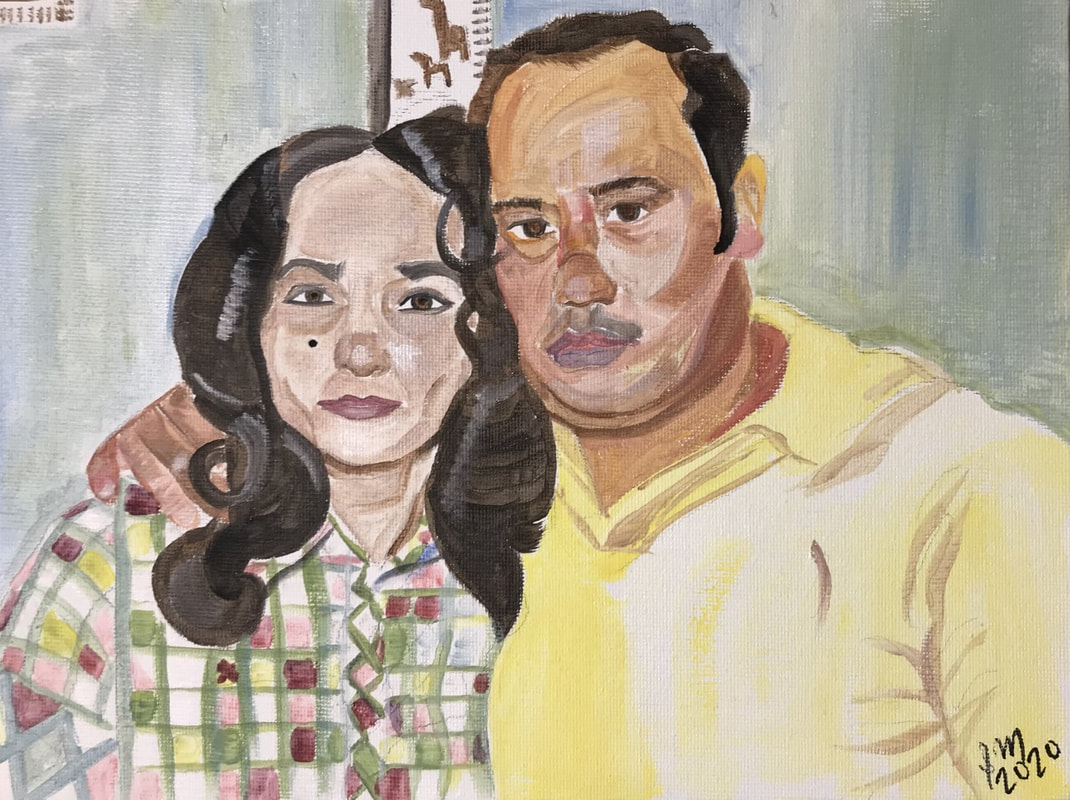 The above is a painting commissioned for a friend looking to represent her grandparents and celebrate her Cuban heritage. 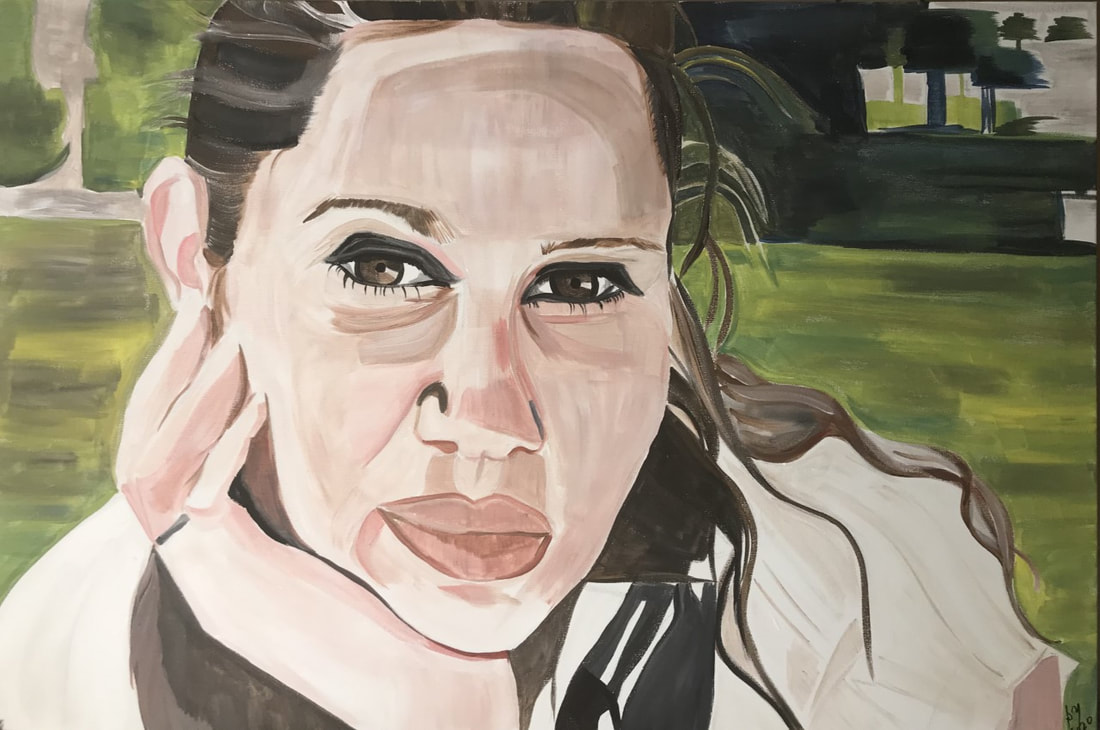 This is a portrait Sydney gifted to her mother, of her mother.

The above is a painting requested by Sydney's sister of her favorite singer, Jhene Aiko.

The above image is a painting commissioned by a client who was a fan of the Strokes, a band who used Basquiat's "Birds on Honey" painting on the cover of their album "The Abnormal"

​The above image is a painting commissioned of the popular cartoon sailor moon.

Nera of Urbino, diptyque style painting, acrylic on two 24x 36" canvases. Personal study of a Titian painting conducted after her visit to Italy on a study abroad trip.